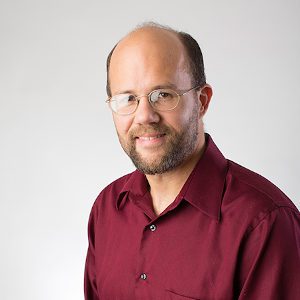 I teach in both the Departments of English and Environmental Sustainability at Earlham. My main fields of expertise are the environmental humanities—which engage various forms of culture, knowledge and history in relation to the more-than-human environment—as well as 18th– and 19th-century British and American literature. I teach courses such as American Literature and Ecology, on American environmental writing in relation to a wide range of philosophical and cultural approaches to nature/ ecology; Imagining Climate Change, on how various forms of culture shape the ways people understand and respond to climate change; Race, Ethnicity, and Nature in American Literature, on the impact of race on Native American, White, Black and Latinx environmental traditions; and Posthumanism, on definitions of the “human” in relation to animals, nature, aliens, monsters, technology and artificial intelligence. I also teach courses in 18th– and 19th-century British and American literature; Reading and Writing Poetry; and core courses for the English and creative writing majors such as Foundations of Literary Study and Junior Research Seminar. I have been elected for a three-year term on the Executive Council for the Association for the Study of Literature and Environment (ASLE), the main scholarly organization in the fields of environmental literature and humanities.

On a personal level, I love to garden; grow fruit trees and briars; cook (vegetarian); spend time with my partner and child; coach youth soccer and follow English soccer (Arsenal and Fulham); play pickleball and ice hockey; meditate (I’m Buddhist); watch movies; and read widely in literature, history, cultural studies, and just about everything. Before becoming a father I also used to write poetry and play the guitar, hopefully I’ll come back to those activities again when I have more time!

Earlham has been an almost ideal fit for me as a professor. Earlham students want to explore how and why their learning matters, both for themselves and for the world.  They are active and committed in the classroom and care deeply about shared values such as the environment and social justice. As a result, teaching at Earlham feels fulfilling and dynamic and continually fresh beyond what I have experienced at other colleges and universities; it is a genuinely communal exploration of how and why knowledge matters in the world. Here the desks are always in a circle; everyone calls me by my first name; and the students and I are committed to continually expanding our minds (and hearts) together. Earlham’s Quaker-informed community and ethos enable that atmosphere (see our Principles and Practices for more specifics on how).

I am currently completing a scholarly book (my third), entitled Landscapes of Genius: Author, Nature, Nation and the Transatlantic Origins of Environmentalism.  The book explores how the “genius” of 19th-century British and American authors, such as William Wordsworth, Henry David Thoreau, Frederick Douglass, and John Muir, became associated with natural landscapes on both sides of the Atlantic.  It demonstrates how those associations shaped both specific landscapes and the overall idea of nature in ways that precipitated the modern environmental movement.  In tracing those associations, the book also explores the wider significance of “genius” in the formation of new models of nineteenth-century liberal democratic nationalist high culture.  It demonstrates how authors’ relationships to landscapes and nature were shaped by race, gender, and class in ways that supported existing social hierarchies and determined who could claim full belonging to “nature” and the nation and who could not. I am also giving a public talk, through the Indiana Humanities “Unearthed” Speaker Series, on “How We Imagine Climate Change and Why It Matters,” exploring representations of climate change in contemporary literature, film, visual arts, political discourse, and various online media and how those forms of culture shape the way people understand and respond to the issue.

My main scholarly field is the environmental humanities, together with 18th- and 19th-century British and American literature.  My scholarship engages a wide range of topics including literature and environment, environmental movements and philosophies, visual landscape arts, eco-theories such as posthumanism and the Anthropocene, and how various forms of culture and imagination shape people’s approaches to environmental issues such as climate change.  Much of my recent scholarship connects representations of nature in 18th- and 19th-century British and American writing with related developments in print culture, visual arts, authorship, nationalism, and the self, exploring the significance of that history for contemporary environmentalism.

William Wordsworth and the Ecology of Authorship: the Roots of Environmentalism in Nineteenth-Century Culture (University of Virginia Press, 2012).

Authoring the Self: Self-Representation, Authorship, and the Print Market in British Poetry from Pope through Wordsworth (Routledge, 2005).

“The Wedding Guest as Reader: ‘The Rime of the Ancyent Marinere’ as a Dramatization of Print Circulation and the Construction of the Authorial Self.” Nineteenth Century Studies, vol. 15, 2001, pp. 19-36.

“John Clare, Ecological Abstraction, and the Abstraction of the Self.” Part of a panel on John Clare: Nature and the Self at the 2013 Modern Language Association Annual Convention, in Boston, Mass.

“Yoking Nature and Nation in ‘America the Beautiful’: A Study in Cultural Migration.” 2013 Association for the Study of Literature and Environment (ASLE) conference, at the University of Kansas, Lawrence.

“Why Ecocriticism Still Needs ‘Nature’: the Example of Asher Durand.”  Preconference seminar in “Ecocritical Art History,” at the 2013 Association for the Study of Literature and Environment (ASLE) conference, at the University of Kansas, Lawrence.

“Landscapes of Genius in Wordsworth and Thoreau.” 2013 North American Society for the Study of Romanticism (NASSR) Conference, at Boston University.

“Green Fields and Lonely Rooms: William Wordsworth’s Projection of the Urban Self onto Nature.” 2011 North American Society for the Study of Romanticism (NASSR) conference, in Park City, Utah.

“’In Lonely Rooms’: Constructing Romantic Nature from the City.” 2009 International Conference on Romanticism (ICR), at the City University of New York.

“William Wordsworth and the Ecology of Authorship.” 2009 Association for the Study of Literature and Environment (ASLE) conference, at the University of Victoria, British Columbia.

“A Home of Leisure in a Landscape of Work: the Cultural and Environmental Politics of Wordsworth’s Home at Grasmere.” 2008 International Conference on Romanticism (ICR), at Oakland University, Rochester, Mich.

“From Wilderness Chauvinism to Respect for an Everyday Nature.” 2007 Association for the Study of Literature and Environment (ASLE) conference, at Wofford College.