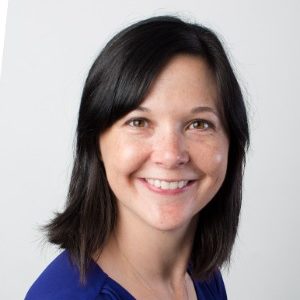 I am a microbial evolutionary biologist interested in host range expansion of virus populations. I contribute to the core courses in the Department of Biology, as well as upper-level biology courses focusing on cellular and molecular biology in the context of ecological and evolutionary mechanisms.

I enjoy spending time with my family, playing volleyball, cheering on the Quaker athletics, throwing pottery, painting, gardening and reading.

I teach at Earlham because of the amazing students, staff and other faculty that I have the privilege to work with. The students in particular are a joy to work with because they strive to make a positive change in the world, and my goal as a mentor is to support them in achieving their goals and aspirations. I love what I do, and when you love what you do, work no longer feels like work.

Viruses differ in the numbers of host species they infect. Some strains successfully infect a range of species. Tobacco mosaic virus, for instance, can infect nine different plant families and at least 125 individual species. Others, such as poliovirus, infect only a single host. Host-range shifts in viruses and the evolutionary consequences of those shifts have implications to human health and agriculture. Natural shifts in host range have been the cause of some major epidemics in humans and other animals, such as HIV, the Spanish flu, and the recent Ebola virus epidemic.

Bacteriophages, which are viruses that infect bacterial cells and are among the best-characterized groups of organisms, serve as a great model system due to their small genome sizes, allowing for full-genome sequencing to elucidate the relationships between genotype, phenotype, and fitness. Students in my research group have worked to identify the natural host ranges of bacteriophages initially isolated on a single host, Escherichia coli strain C. These well-characterized viruses are all of the same family of Microviridae, but differ vastly in the number and type of bacterial species they can successfully infect. We have conducted a series of gene swap experiments of these closely related bacteriophage species with different host ranges to determine which genes are responsible for these variations in host range. Insights from these studies regarding the evolution and genomics of host range will inform our understanding of viral emergence.

I am interested in the evolution of host range expansion of virus populations. Emerging diseases are often the product of a host shift, which occurs when a parasite jumps from its original host and into a novel host species. By understanding the evolutionary mechanisms underlying changes in host range, we may be able to better respond to, and even prevent, future shifts of disease-causing viruses.

2013 McGee, L.W. and S. K. Remold. The effects of pleiotropy on the evolution of host range. University of Louisville Graduate Dissertation.