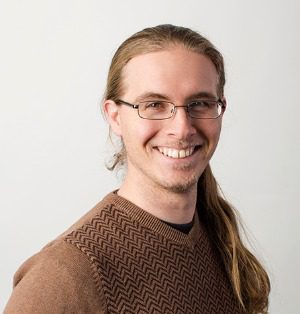 I enjoy bread baking, watching films and indulging the whims of my cats.

I’ve chosen to teach at Earlham because Earlham’s students honestly care about their education. They are inquisitive, intellectually curious, and passionate. What more could a professor ask for from a student?

With the recent rise in power and popularity of the alt-right and neo-nazis, I am working on an article about how portrayals of Greeks and Romans on screen often reinforce and validate their claims that Greco-Roman antiquity is the origin of “white culture” and the foundation of “Western Civilization.”

I find myself increasingly drawn to the modern reception of classical themes, especially in films and television. As I tell my students, “What a writer says about the Romans generally tells us more about the writer than it does about the Romans.”

Paule on Stratton and Kalleres, Daughters of Hecate: Women and Magic in the Ancient World. In Bryn Mawr Classical Review July, 2015.

“Heracles Goes to Washington: The Apotheosis of an American Patriot in Olympus Has Fallen (2013)”
Gods and Heretics: The 2016 Film and History Conference (Milwaukee, WI)

“On Classics and the Modern World”
A Colloquium in honor of the retirement of Thomas Van Nortwick (Oberlin, OH, 2015)

“Hag and Snatcher: Canidia as Child-Killing Demon in Horace’s Epode 5”
The Classical Association of the Midwest and South (Baton Rouge, LA, 2012)

“Canidia’s Many Faces:  On the Pluralistic Nature of the Roman ‘Witch’ ”
The Classical Association of the Midwest and South (Grand Rapids, MI, 2011)

“The Sparrow’s Death at Troy: A Metapoetic Reading of Catullus 65”
The Classical Association of the Midwest and South (Tulsa, OK, 2010)

“The Portentous Owl, or: How I Learned to Stop Worrying and Love the Bubo”
On the Border: Animals, Hybrids and Monsters in Ancient Culture, (joint conference between The Ohio State University and the University of Sienna, Italy, 2008)

“Redefining Necromancy”
Per Purum Tonans: Aspects of the Natural and Supernatural in Antiquity
(University of Virginia, 2007)