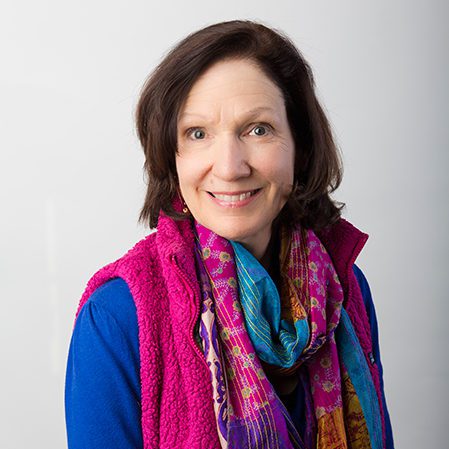 I have decades of experience researching social movements and now explores the interactions between humans and non-human animals. My favorite courses, though, are Contemporary Social Thought and Women, Gender and Sexuality. In those courses I see students gain confidence in their ability to read, think and discuss complicated ideas. I also see them connect the material to their own lives—and their insights constantly challenge my own views of the world.

I teach spinning and ballet classes, and I love to spend time running with my German Shepherd puppy, Atty. I also love to hang out with my Earlham friends.

I teach at Earlham because the students are great. Our students love to be challenged, so I get to teach courses that I wouldn’t be able to teach anywhere else. The time I get to spend with these students both in class and outside of class as they explore the significance of this material constantly challenges me to rethink my own views of the world.

I am currently working with students on a study of hunters and their Mountain Cur hunting dogs in Tennessee. I am fascinated by the differences between the relationships hunters establish with their hunting dogs and the understanding of dogs that most of us glean from our connection to the dog as a family pet. Questions my students and I are examining include how:

Over the last 20 years I have conducted research on social movements questioning the need for unity. Based on ethnographic research in Mexico and Spain, I argue unity renders movements less adaptable to change. My current research explores interactions between humans and non-human animals.

Tepoztlán and the Transformation of the Mexican State:  The Politics of Loose Connections.  University of Arizona Press, 2005.

Articles (All publications are refereed unless otherwise noted)

“Fragments from the Past: The Politics of Storytelling in Morelos Mexico.” In Traditional Storytelling Today. Margaret Read McDonald, ed. Chicago: Fitzroy Dearborn Publishers pp. 498-501, 1999.  (not refereed)

“Contesting Authenticity: Battles over the Representation of History in Morelos, Mexico.”  Ethnohistory Vol 40 (3):438 458, 1993: An earlier version of this paper is also published as  Working Paper #194 for the Helen Kellogg Institute for International Studies, University of Notre Dame.

“When the People were Strong and United: Stories of the Past and the Transformation of Politics in a Mexican Community.” The Paths to Domination Resistance and Terror.  Nordstrom, Carolyn and JoAnn Martin, eds. Los Angeles: University of California Press, 1992.

“Motherhood and Power: The Production of a Women’s Culture of Politics in a Mexican Community.” American Ethnologist 17:470 490, 1990.

Review of Spirit and system: media, intellectuals, and the dialectic in modern German culture By Dominic Boyer. Journal of the Royal Anthropological Institute, Mar2009, Vol. 15 Issue 1:202-203.

Review of Social Stratification and Mobility in Central Veracruz. Hugo G. Nutini. The Journal of the Royal Anthropological Institute 13:497-498, 2007.

Review of Women and Social Movements in Latin America Power from Below. Stephen, Lynn. American Ethnologist 26(2):482, 1999.

Review of The Meanings of Macho Being a Man in Mexico City by Matthew Gutmann. The Journal of the Royal Anthropological Institute 3(4):817, 1997.

Review of Autonomy and Power The Dynamics of Class and Culture in Rural Bolivia by Maria L. Lagos. American Anthropologists 97(4):837 838, 1995.

Review of Toward an Anthropology of Law in Complex Societies: An Analysis of  Critical Concepts by Rene Gadacz. Anthropologic 26(1):66 67, 1987.

Specters of the Revolutionary Subject:  From Marx to Derrida.  Paper presented at the Rethinking Marxism Conference:  Marxism on the Global State, November, 2003, University of Massachusetts: Amherst, Massachusetts.

Communal Land and Political Passion on the Eve of Privatization: A View from Morelos, Mexico. Paper presented at the American Anthropology Meetings in San Francisco, CA. December 2 5, 1992.